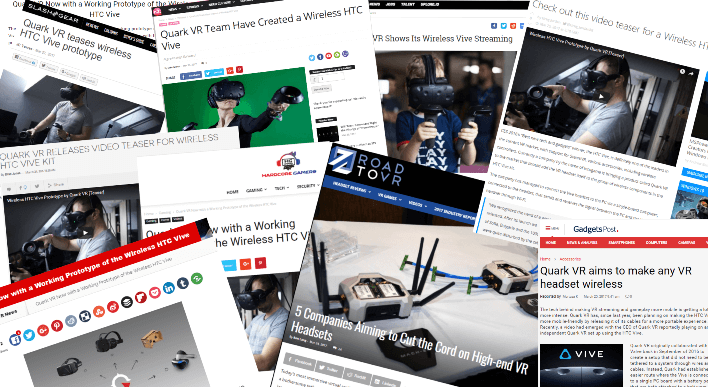 The VR developers from Quark VR just showed a working prototype of a wireless HTC Vive. The team released a teaser demonstrating their progress with their challenging project.

What makes Quark VR’s solution extraordinary is not only the wireless streaming, but the ability to stream to multiple headsets at the same time. This is why several VR arcades are already testing the software. They have been developing a way to cut the cords off the HTC Vive for the past several months with Valve’s guidance at certain areas.

‘Even though the prototype still needs some polishing, it works as expected and is a giant leap forward for the wireless future of Virtual Reality’, CEO and co-founder Krasi Nikolov says.

He is also the one in the video teaser that VR enthusiasts can see on QuarkVR’s YouTube channel and their Facebook page.

Quark VR’s very own proprietary software enables low latency streaming to a number of headsets. As seen in the teaser, the HTC Vive headset is connected to a small single board computer and a portable battery back. To make it more convenient, the developers are temporarily using a waist pack to store the computer and the battery. So far, the battery allows for over 2 hours of gameplay.

The team also teases an upcoming video where they’ll demonstrate wireless multiplayer with different headsets. This is Quark VR’s biggest advantage: it’s a software solution that works with multiple different headsets or as developers call it: it’s hardware agnostic.

The news about the prototype gained huge international attention after a press release from Press Start.